The world of non-dairy and gluten free foods can leave many people with a tiring battle to find the best tasting foods. Now introducing “Taste This Foods”, designed by celebrity TV Chef Joe Ciminera has many people writing. A walk through Chef Joe’s kitchen in Bellmore was similar to a tour at Willy Wonka’s Factory.

The aromas of dried rosemary, smoke and something akin to non dairy cheddar crowd and jostle against one another in the shiver-cool space, so concentrated that a visitor’s experience could spark nostalgia to their all time childhood favorite dishes. 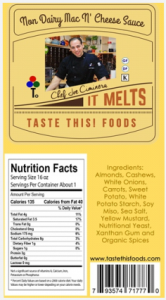 The spare white room is filled with gadgets like I have never seen before, each tray filled with blenders of “cultured nut product,” Standing in the center is a chef who is constantly tasting the quality of the products, who is describing how it took months to find commercial cheese cultures that weren’t grown in cow’s milk. The staff is very big on priding themselves that they are under a “Vegan” facility.

Chef Joe Ciminera, is no stranger to the television-cooking world who has a glowing PBS cooking show, “Taste This TV.” Among vegans, he is the Godfather figure, an inventor and a statesman. When Joe Ciminera’s Kitchen released its first products in Jan 2016, Ciminera finally began to capitalize on the artisan non dairy, gluten free movement he helped start.

The new food maker’s collective goal isn’t just to supplant the rubbery, bland alternatives that have plagued the gluten free and the dairy free world. In their rquest to make a vegan diet more appealing, they’re attempting to answer the question: What makes these products better than the rubbery ones on the market now? 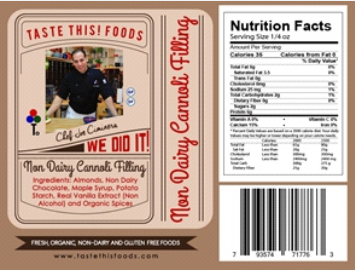 Most other companies are still using Carrageenan, which has some scientist calling this a very dangerous product causing inflammation. The vegan products that Chef Joe Ciminera made this last year has already one awards up and down trade shows. What to buy Non-Dairy Ricotta Non-Dairy Mozzarella Non-Dairy Cannoli Cream Non Dairy Mac N Cheese Sauce.